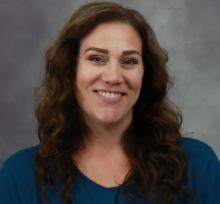 Andrea began her career with Ambulatory Care Charge Entry in July of 1999 as Extra Help.

In February 2001 she was hired as a permanent Health Service Representative by Valley Health Plan.  In September 2004 she was hired by County Communications as a Dispatcher Trainee, promoting to Dispatcher II in 2005, and achieving Dispatcher III status in 2007.

Beginning in 2007, Andrea served as a Certified Training Officer. In this role she trained Dispatch trainees on Departmental policies and procedures, call taking, and basic radio dispatching.  Andrea was also given the opportunity to Work Out of Class as a Senior Dispatcher.

In August of 2016, Andrea was promoted to Supervising Communications Dispatcher assigned to Dayshift. Andrea also became the Team Leader for the Tactical Dispatch Team.

In February of 2020, Andrea was promoted to Chief Communications Dispatcher in Operations. In her current role, Andrea directs the activities of Dispatch Operations at County 9-1-1 Communications, overseeing shift and schedule preparation, and mentoring supervisory staff.  Andrea also acts as liaison with allied and contracting agencies, the media, and the public.